TIME… but does time exist? What causes time? The clock? Our iPhone? Our work?
None of all that, time always passes infinitely, it never stops…time has no time, time is infinite!
The new logo dedicated to TIME encloses the symbol of infinity, representing how our beloved bicycle can perhaps become the ideal means to go through time.
Pedalling…infinitely at any time and without thinking about our time.

‘Time’ was the main theme of 2014. 8969 riders left La Villa in a 36-minute long train, the time it took the cyclists to enter the competition to the rhythm of live music and encouragement. There were large numbers and a huge demand for participation (32,600 people), with the usual formula: a fixed number of participants, car-free Dolomite passes, charity initiatives and eco-sustainability, with the use of electric cars and motorbikes to transport the jury and the race organisers. The “mür dl giat” was the great new feature. All cyclists on the medium and long route, during the second passage through La Villa, were asked to face a final tough challenge: 200 m after the turn for Corvara, then had to climb the  “mür dl giat” (the cat’s wall), as the inhabitants of La Villa are known as ‘cats’. This was a deviation with a 19% grade that crossed La Villa. At the top it re-joined the main route to the finish line in Corvara.

Here some links of the 28th edition:

“Let your heart decide” they say, and it is true: decisions made with the heart, when they are deeply felt, are always the right ones.

However, in order to feel with your HEART, the mind must be cleaned, purified and liberated. We have to stop lying to ourselves, in order to deal with our daily lives, as much as possible, with our heart.
We don’t need sport, or a holiday, or to free ourselves from stress…the mind frees itself with a tool that is within everyone’s grasp: forgiveness.

The black dots represent the negative that we experience every day … a tiff, disappointment, a ‘no’… but also our unstoppable desire to appear better than others, our arrogance, judgement and ego.

In the logo our mind is represented as a dark and obscure labyrinth, dotted with black points, but forgiveness intervenes with its strength (colour) to protect our heart and leave it intact. (by Manuel Bottazzo)

A marvellous day greeted the 9.302 athletes from 64 countries. The Maratona 2015 was confirmed once again as even more of an international event. The theme of the race ‘Forgiveness’, demonstrated that it was a far-ranging event that touched all our sensibilities. There is no beauty without awareness. And the Maratona is a constant invitation to ride with strong legs and an open mind.

Here some links of the 29th edition: 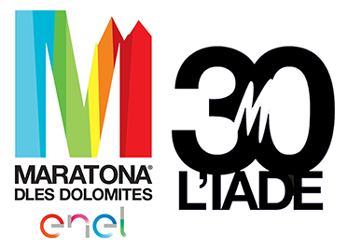 The theme chosen for the 30th Maratona dles Dolomites – Enel was JOURNEY.

In fact, we set off a long time ago and have never stopped.

Journey has always been key for human beings. It was believed, at the turn of the last century, that technology and science could solve the world's problems, from hunger to disease (in fact, penicillin was a great invention). But the Belle Époque, with its hedonism and excess energy, actually triggered the Urkatastrophe, the original catastrophe. A war lasting thirty years, with a cease-fire in the middle, a thinly disguised desire for peace. The destination of that trip, made up of hope and technology actually led humanity in a completely different direction.

Let's think about William Anderson' trip in his Apollo 8. As well as discovering new horizons, millions of people became aware of our ecosystem. The only white and blue planet, in the middle of all that gleaming wonder, was our "Mother Father Earth". "The most beautiful sight of my life" the astronaut called it. It was Christmas Eve of 1968. And that photo "Earthrise" became one of the most evocative images of all time.
The most famous trip, as we know, is that of Ulysses. Tenacity, shrewdness, daring in crossing over to the unknown and heroism were the elements that accompanied him along his infinite wanderings. On his travels Odysseus discovered richness and poverty while growing up and stripping off. Because travel transforms people and turns them into something else, taking them elsewhere. It is as though the real aim isn't seeing a place but learning to see everything, even ourselves. Ulysses is the figure of the ancient and brave traveller. Through travel he found freedom and the desire for knowledge to return to where he started. That's it, the Nostoi, the Returns in us. Coming home. His greatest wish was to return, to Penelope, his wife, and to his son. Isn't this the innate ancestral wish within us?

Journey means discovering new places, new environments. But it is also dialogue, enrichment and contamination. The most important trip however is the one inside us. We are made of relationships. We are relationships with others. Journey sometimes heals life's wounds. Journey makes us light, free from weights, removes barriers and reduces things to the essential. It can distract magic spells, as Rimbaud wrote, and hearten: "I had to travel, to distract the magic spells clustered in my brain. On the ocean, that ocean which I loved as if it were bound to wash away some contamination from me, I would see the consoling cross rise".

What really counts is a trip towards beauty, invisible to a distracted man. Beauty can be found if we are beautiful within. The action of looking is a finding in itself.
Heartfelt wishes to all of us, may our travel time be a time of forgiveness, simple and true things. Like silent steps in the mountains, hopes and dreams that never end.

A long, big snake of cyclists that took about 36 minutes to begin the race with a gorgeous landscape and an enchanting and exciting music to incite the start. That’s a high numbers’ mechanism with more than 33.000 pre-registrations but a limited numbers race; the Dolomite passes closed for all the race long; charity’s objective and eco-sustainable way to live the race with electrical cars and motobikes for internal use.
A game which twists and turns through the 7 Dolomite passes: Pordoi, Sella, Campolongo, Falzarego, Gardena, Valparola, Giau, strarting from La Villa and finishing to Corvara. 3 routes: the long one of 138 km and 4230 mt of altitude; the medium one of 106 km and 3130 mt of altitude and Sella Ronda of 55 km and 1780 mt of altitude.
Half the cyclists are Italian, the other half are a heterogeneous group from five different continents: Germany, Great Britain, the Netherlands and Belgium will represent Europe; Qatar, Japan, Korea, Colombia and Kazakhstan, are only some of the nationalities of the cyclists travelling from afar.

A new logo for the Maratona's 30th anniversary 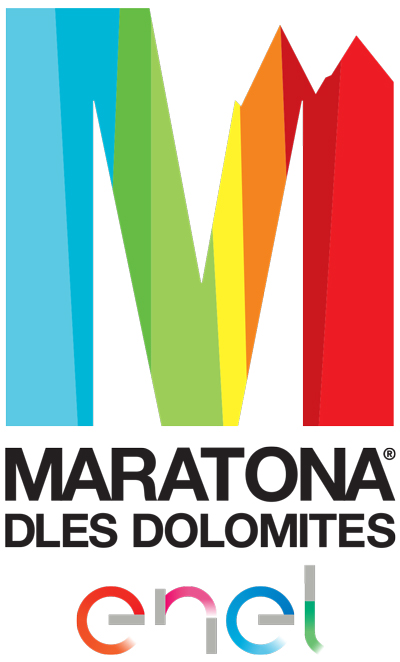 To celebrate 30 years of the Maratona dles Dolomites – Enel we have decided to renew the event logo. We have done this by following the outline of the mountains that have always surrounded us, because the mountains are our home and the Dolomites are our heart.

In the skilful hands of Manuel Bottazzo, the new logo symbolises a long journey of sweat, passion, dreams and madness… because you had to be a bit mad to imagine a bike Maratona through the Dolomites 30 years ago.

The result is a monogram with the M that represents not only the M of Maratona, but also the M of mountain with its continual ascents and descents and its passes to cross, one after another. There is a special feature: if you look carefully, the top right-hand part of the M represents the last two challenges of the Maratona: his majesty the Giau, where everyone signs their adventure in the Maratona, offering the most exciting moments; and the Valparola, because in that long, straight line that is always sunny (even when it is raining!) every rider finally has the end in sight, begins to smile and dreams of the well-earned descent towards the finish line.

The monogram is strong, powerful and geometrically perfect, but inside it has a heart of tremendous colours that represents these places. We want this to be closer to cyclists in particular and to responsible tourists in general.

Here some links of the 30th edition: